59 arrested in post-election violence in Alexandra 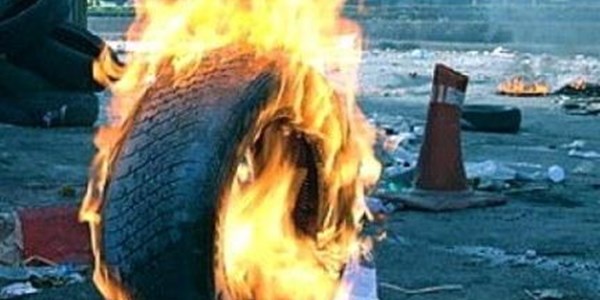 Johannesburg - Gauteng traffic police warned the public away from certain areas of Alexandra township at night on Saturday following violent overnight protests.
"We advise motorists and other road users to avoid Vincent Tshabalala road, 2nd avenue, Selbourne street and roads/streets near Madala hostel at night or when it is dark due to acts of criminalisms (sic) and if there is no compelling reason/s for motorists to be in Alex please avoid the area," a statement said.
Spokesman Obed Sibasa said Second Avenue was also closed to traffic, and there were reports of cars being stoned on the N3 nearby earlier on Saturday.
Meanwhile, 59 people had been arrested in connection with the protests since Friday and would appear in the Alexandra Magistrate's Court on Monday, Gauteng police spokesman Brigadier Neville Malila said.
Malila said "peace and calm" had been restored in the community with police maintaining high visibility.
One firearm was also seized during an operation at one of the hostels in the area on Friday night.
A Sapa reporter on the scene said Eighth Avenue was quiet on Saturday morning following the protests which have included the torching of an IEC centre in the area.
Remains of burned tyres were seen, and on Sixth Avenue, rocks placed in the road slowed people trying to drive through.
On Friday Gauteng premier Nomvula Mokonyane said SA National Defence Force troops were called in to quell the protests.
"The provincial police commissioner [Lt Gen Joel Mothiba] has informed me that people in Alexandra have been attacking buildings and assaulting others... the army is moving as we speak," Mokonyane said on the sidelines of the IEC results centre.
Meanwhile, a man swept and removed debris from the front of his house with a wheelbarrow on Saturday morning.
His house was opposite the Post Office Building where the temporary Electoral Commission of SA (IEC) offices were based during the national and provincial elections.
A woman passing by complained that protesters had caused unnecessary work for the man.
The man said he did not know what the protest was about because there were many stories circulating regarding the elections.
He spoke on condition of anonymity, because he feared the protesters would burn his house down.
"Some say the ANC threw away EFF and IFP ballot papers. That's the story going around," he said.
He said no one was attacked in the area but protesters targeted the building.
"Yesterday there was a lot of action further up. A lot of police were going around. I also heard some gun shots. Maybe foreigners were attacked there."
On Friday Gauteng police fired rubber bullets and stun grenades to disperse between 300 and 400 people gathered outside the court demanding that people arrested for public violence on Thursday be released.
Malila said a room in a community centre in the township that was used by the IEC was burned by residents on Thursday night.
There were people inside the centre at the time of the fire, but no injuries were reported.
EFF Gauteng leader Dali Mpofu denied an accusation by the ANC that his party brought in protesters into Alexandra.
"We do not condone violence... and of course they would single out the EFF out of all parties involved," Mpofu said.
Sapa