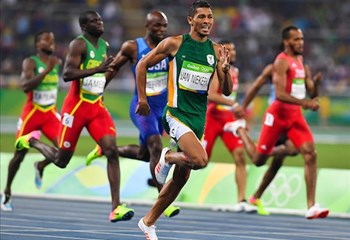 Wayde van Niekerk - Gallo
The name of the 400m World and Olympic champion, Wayde van Niekerk, appears in the list of athletes entered to compete at the 2019 ASA South African Senior Athletics Championships in Germiston which get underway on Thursday.

Recently the world record holder in the one lap sprint made his log awaited return to the track during the ASA Free State Championships in Bloemfontein.

While Van Niekerk was a long way off is international best of 43.03 sec, which he recorded during the 2016 Olympics in Rio de Janeiro, he was able to win the race at the canter.

This after being out of action with a serious knee injury for more than 18 months.

While he comfortably won the race in a 47.28 sec, his camp stressed that the whole exercise was nothing more than testing the waters following his lengthy lay-off.

This is exactly the same mindset which Van Niekerk has adopted for this week's national championships at the Hermann Immelman Stadium.

Van Niekerk is expected to be in action as from Thursday afternoon at 16:10 when the heats for the men’s 400m sprint gets underway.

He should have no trouble in advancing to the semi-finals which will start at 19:10 on Friday evening.  The final in the men's 400m will be run on Saturday afternoon at 16:30. Van Niekerk can however still withdraw from the meet during Wednesday evenings managers meeting, however, it is unlikely.