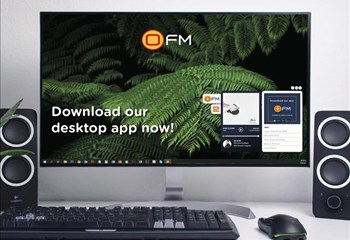 Bloemfontein – OFM, inspiring listeners to live the real good life in Central South Africa, is now offering a live streaming service through our OFM desktop app that will allow listeners to listen to OFM on their computer anytime of the day.

Security; web applications are exposed to more security risks than desktop applications. You can have a total control over the standalone applications and protect it from various vulnerabilities.

Says Lindiwe Mtwentula, OFM Marketing Manager: “The OFM desktop app is no different to any web-based application and has numerous benefits. It’s easy to maintain, has a low security risk and because it’s a standalone application, Internet connectivity should not be an issue. OFM is now literally at your fingertips!”

CEO of the Central Media Group t/a OFM, Nick Efstathiou says the desktop app is another innovative product offering provided to the stations loyal listener base, that is looking to listen to their favourite radio station on all and any device. “Streaming services need robust technological support, not to mention the services allow the stations loyal listeners to consume the stations content offering across multiple devices, not only the radio”, says Efstathiou.

Installing the OFM desktop app is as easy as a few clicks and is completely free of charge.  Download it from the OFM website at www.ofm.co.za.

The station serves the influential SEM 7-10 market with a footprint across the Free State, Northern Cape, southern Gauteng and North West.  The brand is synonymous with the people of Central South Africa and covers the full spectrum of listeners:  from urban youngsters to retired pensioners, from working moms and dads to successful professionals, from rural communities to agricultural producers.  As such, OFM offers a number of niche features – including an agricultural programme, Agri news twice a day, entertainment and sports features.

Our audience is incredibly loyal and supportive and as such OFM enjoys one of the highest instances of time spent listening to the radio in South Africa. OFM is part of the Central Media Group with its head office located in Bloemfontein and a studio in Welkom. Find OFM at www.ofm.co.za.

Why are sharks afraid of dolphins?