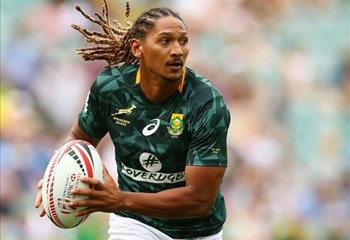 Justin Geduld - Gallo
Justin Geduld has recovered from the injury, which cut short his participation in the Dubai Sevens.

While Springbok Sevens coach Neil Powell believes the improvement shown by his 13-man squad in the latter stages of last weekend’s tournament was enough to keep faith in the same players for the HSBC Cape Town Sevens.

Powell named the same 12-man squad from last weekend to front up in the Cape Town Stadium on Saturday. With Geduld back, Selvyn Davids will again be the official replacement.

Geduld took a knock halfway through the tournament in Dubai and was replaced by Davids. However, the experienced Blitzbok playmaker was cleared to play on Thursday, so the 24-year-old utility back reverts to the bench again.

“I was pleased with the performances against Scotland and Fiji, our last two matches last Saturday, and I saw more of that fluency and urgency in training as well this week,” said Powell.

“Knowing the players, they will all be desperate to correct last weekend's disappointments and they get a chance to redeem themselves this week.”

Powell called in Chris Dry and Mfundo Ndhlovu to train with the Blitzboks this week, but was happy to tackle Pool A opponents New Zealand, Samoa and Zimbabwe with the same squad.

“We have learned lessons from last weekend, but that is also true for the other teams in the tournament,” said Powell.

“Everybody knows a little more of each other than was the case last week, so it will be tougher to break down defences, no doubt. That said, we know we can only improve from last week and that is a nice prospect.”

Powell said the focus remains on the first match against Samoa at 12h27 on Saturday.

“We had a tough battle against them in Dubai and this time it will not be different,” said Powell of their Pacific Island opponents, who were beaten 19-12 by the Blitzboks last weekend.

“They are a very physical side with some big, fast players and we will have to be very sharp for our opening match.”

? Powell also congratulated team physiotherapist, Hugh Everson, who will be running repairs for the Blitzboks in his 100th tournament.

“It was not planned like this, but I am pleased that Hugh can share this milestone with the Blitzboks fans in South Africa,” said Powell.

“He has been with the team since the days when I was still a player and he continues to be an important member of management. Congratulations to Hugh, it is well deserved.”

The Springbok Sevens squad for the Cape Town Sevens: