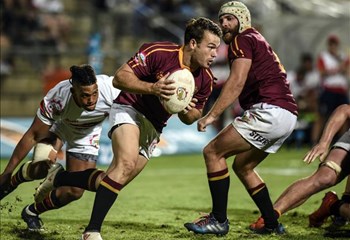 It’s the 2019 Varsity Cup final on Monday evening and all eyes will be turning to Stellenbosch, where the defending champions, Maties will tackle Tuks.

Is it the battle between the two greatest teams in the competition with Maties targeting a record five title, while the visitors from Pretoria will have their sights set on a fourth title.

Maties are unbeaten, and Tuks’ only defeat was against the men in maroon with a 26-24 loss during round three.

The Maties coach, Hawies Fourie, told OFM Sport that they are up for the challenge.

“We are really looking forward to the final, it’s always a special occasion to play at a packed Danie Craven Stadium in front of all of our supporters.

“Eleven of our players played in the 2018 final, so we do have the experience. The guys know what it is about.

“We want to put in another big performance. We’ve won all nine games that we’ve played in this season.

“Before the season started we said to each other that we want to win every game that we play in, so we just have one more hurdle to go.

“Tuks has a very good team with a very good kicking game, their pack of forwards scrums well and their mauls is effective.

“We need to be on par and be at our very best, but I’m pretty sure that our players will be up to it.

“We’ve worked really hard for this one and the players want it really badly.

“So, having said all of that I am looking forward to the final, and hopefully we can lift the cup again.”

Monday evening’s big final at the Danie Craven Stadium in Coetzenburg kicks off at 19:00.

Manjezi returns to start at Ravenhill

'They see Ruan as the Mayor of Belfast' - Coetzee