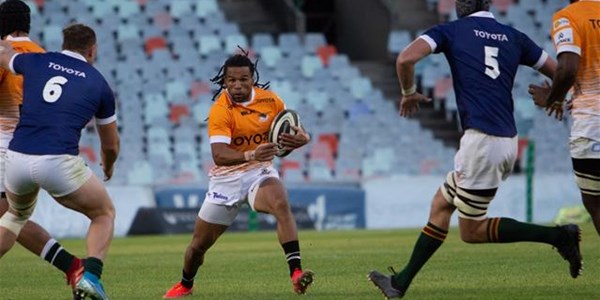 The Toyota Cheetahs winger, Rosko Specman, has reaffirmed this commitment to the Bloemfontein-based franchise.

Recently the Springbok Sevens stalwart joined the Stormers on a loan deal for their last two matches in Rainbow Cup SA series.

Specman has since linked up with the Springboks and will in all likelihood not be available for the Cheetahs Currie Cup campaign.

Specman said that he and the Cheetahs coach, Hawies Fourie, have an understanding.

“Coach Hawies and I have a good understanding and if he maybe feels that I must go to the Stormers again, he will maybe let me go or if he feels that I must stay and play the games that he has lined up for the Cheetahs then I will stay with them.

“But, for now the coach and I have a good understanding.”

Specman was in the rare position where he had to choose between representing South Africa at the Olympics for a second time, or possibility make his 15-man debut for the Springboks and play against the British & Irish Lions.

Specman said that after consulting with the Blitzboks coach, Neil Powell, he chose to pursue his Springbok dream.

“It was a tough one for me to choose, but when I spoke to coach Neil (Powell), he said that I had played an Olympic Games before and, if this opportunity came, he would give me the freedom to go to the Springbok camp.

“It's once in a lifetime. It comes once every 12 years.

“I have played in the Olympics, but I haven't played for the Springboks before.”

The first Test between the Springboks and Georgia will be played on Friday, 3 July, at Loftus Versfeld in Pretoria.