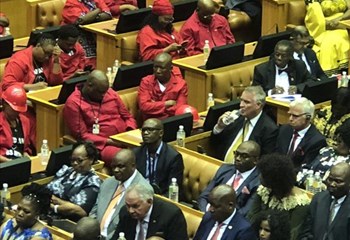 There is a high need to revitalise State Owned Enterprises (SOEs) and deal with reports of corruption in all state entities. This is according to President Cyril Ramaphosa.

Delivering his second State of the Nation Address (SONA), Ramaphosa told the country that they will be taking more decisive measures to bring stability to these entities and restore their reputation. This after he acknowledged that the mismanagement and corruption at many of the state-owned companies has severely undermined their effectiveness, and cited Eskom as one of the entities that will soon need to come up with a new business model. Ramaphosa confirmed that a number of these companies have been used by many as cash cows for corruption and led them in a financial rut they find themselves in. He condemned acts of corruption in all spheres of government and warned that the government is now left with no choice but to step up the fight against corruption and state capture.

Ramaphosa further called on those with information that could led to the prosecution of those involved in the looting of state funds and eroding of state companies to come forward.

The fight against corruption is listed amongst his five most urgent tasks. He told the house that on top of his list of priorities is to accelerate inclusive growth and create employment, develop the education system and skills set in the country, improve the health sector and the lives of all South Africans, as well as strengthening the capacity of the state to address the need of all citizens.

President Ramaphosa has further announced that he will establish a directorate within the NPA to deal with evidence that has emerged at the Zondo Commission of Inquiry. He highlighted that prosecutions must happen and stolen funds should be recovered.