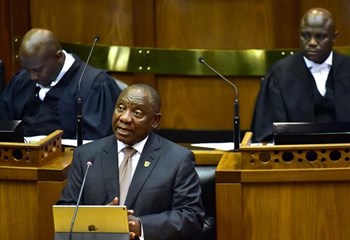 The government is planning on intensifying efforts to deal with the water crisis in South Africa. This was revealed by President Cyril Ramaphosa in his State of the Nation Address (Sona) on Thursday, February 7.

Ramaphosa indicated that the state and the private sector will be utilised to address the sewage crisis that is facing many parts of the country. He implied that infrastructure challenges are primarily to blame for the poor water quality. The OFM News team has in recent months reported on a number of municipalities in Central South Africa that have faced water issues due to infrastructure challenges. Tokologo, Maluti-A-Phofung and Kopanong Local Municipalities are but a few of these municipalities.

“Just as we did with the Vaal River, where the SANDF intervened to address a sewage crisis, we will call on all the capabilities of the state and the private sector to address infrastructure challenges. We will strengthen the technical capacity in government to ensure that projects move faster, building a pool of engineers, project managers, spatial planners and quantity surveyors. This comes after Minister of Finance, Tito Mboweni, announced during his inaugural Medium Term Budget Policy Statement in 2018, the military had been roped in to assist with engineering and other expertise to help fix the Vaal water crisis, which was receiving wide media attention at that stage. Mboweni reassured South Africans that treasury is dealing decisively and urgently with the water crisis.

OFM News reported that the pollution at the Vaal River dates back over a decade, with Emfuleni Municipality being blamed primarily for the crisis. Save the Vaal explained that the complete breakdown of the sanitation system at the ailing Emfuleni Local Municipality has resulted in raw sewage spilling into the Vaal River from several points. Vice Chairperson of Save the Vaal, Maureen, was adamant the pollution is not only an environmental disaster, but is a health risk for people coming into contact with the contaminated water. She said farmers in the area use the water to irrigate their crops and animals drink the water. She explained that domestic drinking water at Emfuleni is safe to drink because it comes from the Vaal dam, but the water in the neighbouring Free State town, Parys – under Ngwathe Local Municipality – is not entirely safe for consumption.

#MidMorningMagic: These men think they figured out a "plan" for the water crisis

Water crisis in Qwaqwa leads to delay in service delivery