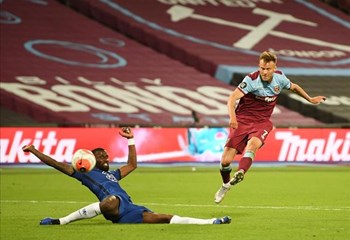 Andriy Yarmolenko - Reuters
In Wednesday nights’ English Premier League action there were two big upsets on the cards as Leicester City and Chelsea both suffered defeats.

Newcastle had no trouble in dispatching the second from the bottom Bournemouth with a 4-1 win at the Vitality Stadium.

At Goodison Park, Leicester City dropped points with a shock 2-1 defeat to Everton.

Arsenal put in their best performance since the league resumed with the Gunners hammering the bottom of the table Norwich City 4-0.

There was another major upset on the cards when the hosts West Ham United stunned the much more fancied Chelsea with a 3-2 at the London Stadium in the London derby.

There was some controversy early in the game when a VAR decision went against West Ham. Tomas Soucek's first-half goal was ruled out by VAR as it was deemed offside and this left the Hammer boss, David Moyes, fuming.

“I was thinking are we ever going to get a decision here? Everything was going against us.

“Some of the things that have gone against West Ham have been really poor.

“I can't explain it. I said to the players that we need to make our own luck and it went our way tonight.

“We pushed hard and did a lot of good things - the players deserve a huge amount of credit, they are sticking to it and got their rewards.

“We'd be lying if we said we weren't looking at the results, of course we are.”

Former director expected before the #StateCaptureInquiry