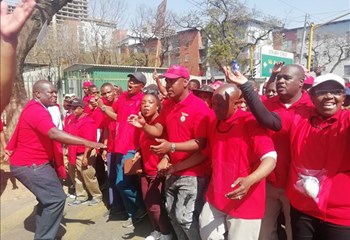 This after scores of workers affiliated with the SouthAfrican Transport and Allied Workers Union (Satawu) on Monday a held a protest against Mbalula. Satawu national spokesperson, Zanele Sabela, last month in a statement said Mbalula said he would not renew the company’s contract when it lapses in April next year. Sabela says this after he met with community members to hear their complaints about NTI’s bus service in Hammanskraal, Mabopane, and Attridgeville. Sabela says ifMbalulacarries on with his plan to not renew the contract almost 1800 workers - 67% of whom are Satawu members - will lose their jobs.

OFM News previously reported that the company is allegedly embroiled in fraud and maladministration worth millions of rands. The DA called on the MEC for Transport, Sello Lehari, to take action on the adverse findings of the 2013 forensic report into this state-owned entity. The report deals with, amongst others, the alleged irregular purchase of 95 second-hand buses for R140 million. The DA’s Freddy Sonakile said the Mochabapula ConsultingServices conducted a forensic investigation in 2013 and further uncovered that an aircraft valued at R9 million, along with its hanger valued at R1.7 million, was sold at a loss of R4.2 million.

Sonakile further said NTI needs R264 million to settle accumulated current liabilities, a further R20 million per month to sustain current services while more than 300 buses of their fleet are currently broken down. Sabela adds that it is a fallacy to think handing over the contract to private business will benefit commuters. "The transport sector plays a crucial role in the economy and needs a sober-minded minister, not one prone to shortcuts and a populist stance,” he further adds.