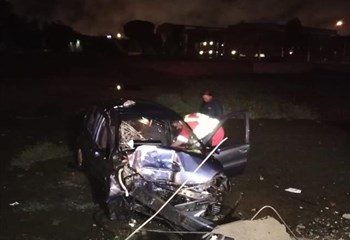 Photo supplied by ER24
A thirty-something-year-old man has landed in a Bloemfontein hospital in the Free State after losing control of his vehicle in wet conditions on Saturday morning.

According to Campbell, “ER24 paramedics arrived at 5 am to find a light motor vehicle in the middle of a construction site, some distance from the road, and the man entrapped. The Fire Department used the Jaws of Life to extract the man while Advanced Life Support interventions were used to stabilise the patient”.

The man is said to have sustained serious injuries, which are being treated at the Pelonomi Hospital.

Mangaung Metropolitan Municipality, reported that heavy rains affected the city’s roads on Saturday, with Mangaung spokesperson, Qondile Khedama, indicating that two bridges in Wepener and Bloemfontein were also affected. Traffic in the Free State capital’s city centre had to be diverted, because the roads were flooded.

Mangaung Councillor, Baba Sebolao, shared a video of an ambulance that was trapped in the mud in Caleb Motshabi township. Khedama says the ambulance was assisted, but did not speak further on the condition of the roads in the area.