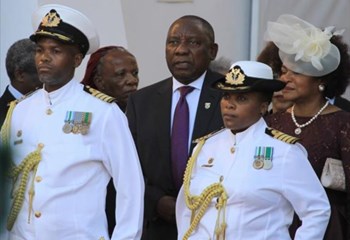 As the country nears the 2020 State of the Nation Address (Sona) set to be delivered by President Cyril Ramaphosa.

Expectations are high that he will address questions relating to the lack of economic growth, high unemployment rate, corruption, the appalling state of municipalities, state-owned enterprises (SOEs), and their escalating debts.

A political analyst from the University of the Free State (UFS), Dr Sethulego Matebesi, tells OFM News that he would be surprised should Ramaphosa fail to address these issues in his speech.

Matebesi highlights that amidst the financial crises faced by Eskom and SAA, amongst other SOEs, Ramaphosa is not left with many options but to answer critical questions regarding the power utility and its ability to ensure sustainable power supply.

Ramaphosa’s much-anticipated speech on Thursday will come amidst repeated calls for Public Enterprise minister Pravin Gordhan to be kicked to the curb.

The EFF has vowed to interrupt Ramaphosa’s speech should he not fire Gordhan before the Sona.

Addressing the media on Sunday, Malema lambasted Ramaphosa for keeping Gordhan in his cabinet and alleged that Ramaphosa is protecting him despite adverse findings against him by the Public Protector and failure to stabilise SOEs.

The party’s leader, Julius Malema, has accused Ramaphosa of protecting the interests of white minorities and said they will not back down until Gordhan resigns from his position.

Following several damning reports by the Auditor-General, Matebesi adds that Ramaphosa will in addition need to respond to questions as to how he plans to deal with corruption and implement consequence management measures in the different spheres of government.

“If you look at the Auditor-General report, there seems to be no improvement on public funds even on municipal level, unaccounted expenditures are on the rise without any consequences, these are some of the key things”.

Matebesi highlights that the plight faced by some of the cash-strapped municipalities, such as Maluti-A-Phofung in the Free State where the Water and Sanitation Minister Lindiwe Sisulu has recently intervened, are amongst some of the issues that will need to be addressed.

This is coupled with the drought experienced by hundreds of communities in several provinces.