The Free State's top achievers in the National Senior Certificate (NSC) exams of 2021 have attributed their achievements to hard work, dedication and passion.

The provincial government and the Department of Education are celebrating the performance of the 130 top learners across the province after the province attained the top spot in the country with an 85.7% pass rate.

OFM News spoke to three of the top achievers. They have all described how hard they had to work and the time they had to sacrifice and dedicate to their studies.

Sipho Mthembu from the Sekgutlong Secondary School and Tlotliso Mofokeng, also from Qwaqwa, say despite challenges and tough conditions they have strived to be part of the top achievers in the country and in the Free State.

Mofokeng achieved 100% both in Mathematics and Physical Sciences and 99% in Life Sciences, with 7 distinctions overall.

Top achiever in the Free State, Chané Nel, from the Hoër Meisieskool Oranje, says she is excited to have performed well during the 2021 Matric Exam.

Nel also outperformed all of her peers in the Free State with 96.55%. Nel achieved nine distinctions out of nine subjects. She received 100% in German as a second additional language. 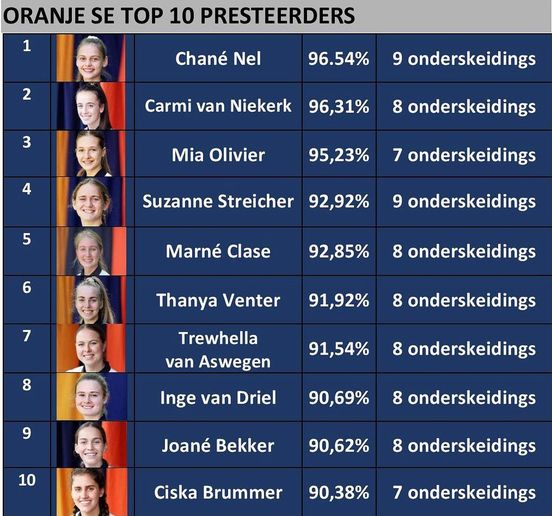 OFM News previously reported that MEC Tate Makgoe said the recipe to a successful country with a well-performing economy is by making sure that there is support for human capital and sponsored education.

He said for a country to succeed, its education must be supported to produce learners will skills. Makgoe added that he had consulted with the premier, Sisi Ntombela, about the funding and Ntombela reiterated that the class of 2021 will be funded through the premier's bursary scheme.

Makgoe also thanked the 112 markers at the Albert Moroka High School in Thaba Nchu, who worked during heavy storms in December 2021 when the school suffered major damages after the roof was blown off.

DA councillor out on a warning