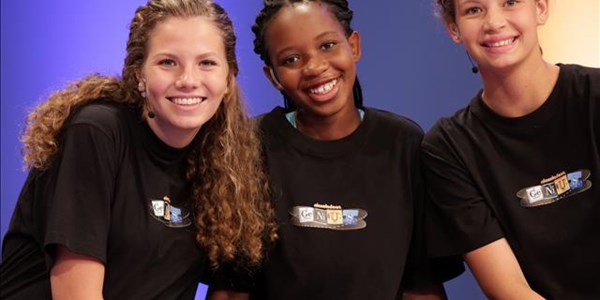 Learners from the Voortrekker High School and Eunice High School in the Free State have beaten thousands of students countrywide to make it to the quarterfinal stages of the well-regarded Maths and Science television quiz show, Nickelodeon’s Genius.

The learners who entered the competition in teams of three are hoping to go all the way to the finals in a bid to be crowned the country’s best Maths and Science masterminds in their age groups.

Head of Mathematics at Eunice High School, Lanelle Kleinhans, told OFM News it was a wonderful surprise that Liane Kleynhans (Grade 10), Baraka Mutambala (Grade 9) and Alanis Alvarez Aranda (Grade 9) have made it thus far – especially given the fact that they were chosen as wild card entries following the round robin stages in December.

She says the students also facilitated their preparations for the competition.

“The girls basically went on their own the whole time. From my part I coordinated a bit. I opened my class for them during break time to practice and to go on a few websites as a team and in the afternoons they tried it on their own.”

She also says her learners didn’t have much time to prepare after they were announced as wild card entrants with only a week to go before the final stages of the competition began.

Nickelodeon’s Genius aims to engage school aged kids in Maths and Science by making contestants take on physics, algebra, calculus and life science questions and by participating in quick-fire quizzes and mental challenges.

The next episode, which features the two teams from the Free State, will air on DStv channel 308 at 14:45 on Friday.