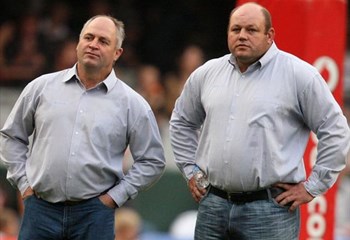 Naka Drotské and Os du Randt - Gallo
The former Springbok and Toyota Cheetahs hooker, Naka Drotské, is in a critical but stable condition after being shot on Thursday night during a home invasion in Pretoria.

Drotské and his former teammate and good friend, Os du Randt, were visiting his brother, Thinus, at his smallholding when the incident occurred.

Armed robbers invaded the house while they were having dinner, from where a scuffle ensued and the shots were fired. Drotské was hit in the abdomen and arm.

He underwent surgery and is currently in the Intensive Care Unit at a hospital in Montana.

Drotské lost a lot of blood and there is still a concern that the bleeding in his abdomen may start again.

There were reports that Du Randt was also wounded in the incident, however, we can confirm that he is fine, but is just suffering from shock.

The CEO of Free State Rugby, Harold Verster, told OFM that the news came as a big shock and that Drotske, Du Randt and their families are in their thoughts.

“The news was absolutely shocking. This morning we got together as Cheetahs family and we had the team together and said that we were thinking about Naka and Os and their families.

“We wish them all the best and our thoughts are with them.”

While the details are still sketchy at this stage, Verster shed some more light on the shooting.

“What I do know is that numerous robbers entered the house while they were busy eating and sprayed them with pepper spray.

“A fight ensued and it went out onto the veranda or lawn, and when one of them drew a firearm to fend them off, Naka was shot. After that, they ran away.”

Drotské is the only man in the history of South African rugby that won the Currie Cup as a captain, manager and as a coach, and he achieved this feat in back-to-back years.

As a player, he played 26 Tests for the Springboks and scored three tries. He was part of the Springbok squad and was on the bench in the final when they won the Rugby World Cup in 1995. As a coach, he was at the helm of the Cheetahs from 2007 - 2015.

Du Randt in his turn played 80 Tests for the Springboks, scored five tries and won the Rugby World Cup in 1995 and in 2007.