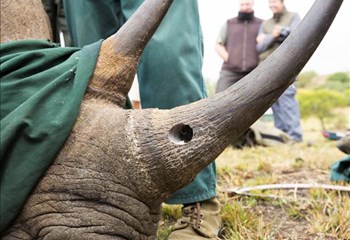 Photo: Gallo
Two men arrested in connection with possession of 167 rhino horn are due to appear in the Brits Magistrate's Court in the North West on Friday.

Petrus Stephanus Steyn, 61, and Clive John Melville, 57, are expected to bring their formal bail application on charges of illegal trade in rhino horn.

They were arrested in a sting operation at Peacanwood, Hartbeespoort Dam, near Brits, on April 13, after a tip-off that a vehicle from a coastal province was carrying a considerable number of rhino horn.

"The vehicle was intercepted in the Hartbeespoort Dam area where the 167 rhino horns worth a substantial amount of money were seized.  The rhino horn were destined for the South East Asian markets," said Directorate for Priority Crime Investigation (Hawks) spokesman Brigadier Hangwani Mulaudzi at the time.

#CoranavirusNW: Infection rate at the centre of focus in NW