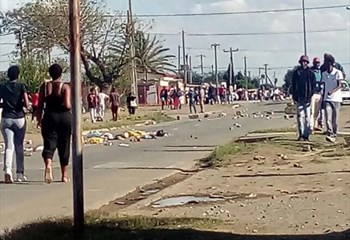 File image
Eighteen suspected looters will make their first appearance in the Klerksdorp Magistrate’s Court on Wednesday, following unrest in Jouberton this week.

Protesters have been on the rampage over service delivery concerns that escalated to the looting of several supermarkets and small businesses.

The chairperson of the Road Incident Management System in the Dr Kenneth Kaunda District, Vusi Mohlakore, told OFM News that the situation calmed down last night, with several roads including the N12 and the Ventersdorp-Klerksdorp road declared safe to use.

The Tigane R503 to Coligny, on the other hand, has been closed off. Meanwhile, 48 people are set to re-appear today in the Kroonstad Magistrate’s Court for public violence.

Protests in the Free State intensified nearly two weeks ago, with a Post Office and several municipal vehicles being torched in the chaos.