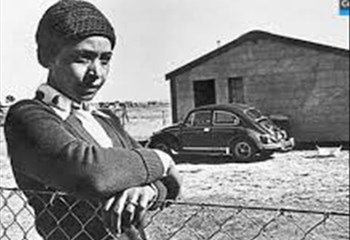 PHOTO: Gallo Images
Arts and Culture Minister, Nathi Mthethwa, is today formally introducing the new contractor selected to carry out the renovations on Winnie Madikizela-Mandela’s Brandfort house to the public.

Plans have been in the works for years to restore the dilapidated house into a museum, as it has been declared a national heritage site. Despite millions being allocated for this very purpose, the house remains in a deteriorated state, with a fence and the placement of security on site being the only recent signs of some development. Mthethwa is expected to provide updates and elaborate further on the restorations and development of the house in his visit to the Free State town this morning. The programme is expected to kick off at 10:00 am at the open ground, next to the library in the Majwemasweu Township.

Following the anti-apartheid stalwart’s death in April 2018, at the age of 81 years, the then Free State ANC interim coordinator, now Deputy ANC Chairperson, William Bulwane, announced that the money that was meant to turn Madikizela-Mandela’s house into a museum was redirected to renovate the Waaihoek Wesleyan Church in Bloemfontein ahead of the ANC’s centenary celebrations in the Free State capital in 2012.

The church, together with the late struggle icon Winnie Mandela’s house in Brandfort, also forms part of the Resistance and National Liberation Heritage Route. The former - dubbed the birthplace of the ANC - is amongst ten landmarks that have been earmarked for world heritage site status. The church was renovated by the Provincial Department of Sports, Arts, and Culture ahead of the party’s centenary celebrations in 2012 at a cost of close to R3 million.

Chairperson of the National Heritage Council (NHC), Thulani Mbuli, said in 2018 they are finalising the dossier which will be forwarded to the United Nations Educational, Scientific and Cultural Organisation (UNESCO) for consideration. The Chairperson says it takes countries many years to finalise these dossiers, but they are near the end and anticipate they will be done with the dossier this year.

How about a tour around the Louvre Museum