WATCH: Winnie Mandela's museum set to be completed by November 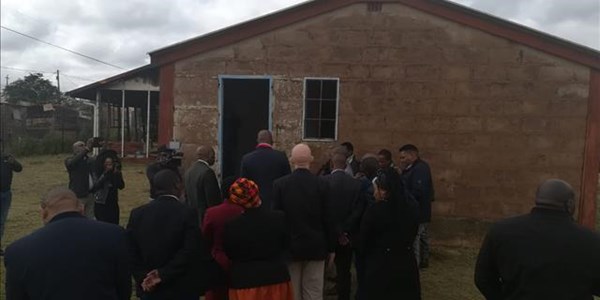 Restoration processes to turn Winnie Madikizela-Mandela's Brandfort house into a museum will be completed by the 4th of November.

This is according to the Minister of Arts and Culture, Nathi Mthethwa. The house that has since 2005 been announced as a heritage site planned to be renovated into a museum, remains dilapidated with a fence and the placement of security on site being the only recent signs of some development.

It has drawn much controversy over the years with community members alleging it had become a hub of criminal activities with many accusing former premier and now ANC Secretary-General, Ace Magashule, of embezzling funds earmarked for it.

Mthethwa has refuted allegations that funds for this project have been looted and that his department is only paying attention to the project now as part of electioneering as the country nears the May 8 elections. He says the refurbishments at the house are part of the department's plan to preserve all heritage sites, to enrich the country's history, and to honour the legacy of struggle stalwarts such as Mama Winnie.

Mthethwa has further announced that refurbishments at the house are set to kick off from 2 May.

"What we are here for is not an isolated matter, it's part of the government programme to honour all struggle stalwarts as we have been doing for the past months with the unveiling of Solom Mahlangu, Chris Hani, and OR Tambo's monuments."

Mthethwa has further announced that there are processes in place to recuperate the funds that were previously allocated to this project from the different service providers and hold those who fail to execute the task to book.

OFM News previously reported that the former Free State ANC interim coordinator, William Bulwane, who is now the deputy chair, said R3 million was initially allocated for the project and R204 000 was spent on the designs, with R2,7 million redirected to renovate the Wesleyan Church, where the ANC was established, ahead of the centenary celebrations in 2012.

Mthethwa has assured the community of Majwemasweu Township that the newly appointed contractor will complete the project within the set timeframe.

He explained that the project plan, among others, include the restoration of the dwelling house and bombed clinic, and converting them to interpretative spaces; and the construction of a multi-purpose centre and that they are joining hands with the local municipality and Lejweleputswa District Municipality to ensure that the Risimati Consulting Engineers carry the project to completion and that all plans materialise.