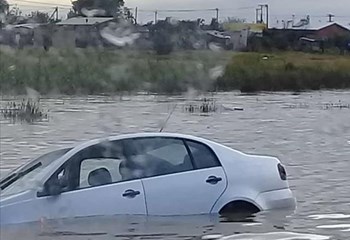 Free State premier, Sisi Ntombela, declared the Bronville suburb at Welkom a disaster area after visiting the flooded area earlier on Wednesday. This was confirmed by the Head of the Disaster Management Center in the Free State, Marcus Butler.

About 140 people have been evacuated from Bronville just outside Welkom, following heavy rain since the beginning of the week and subsequent flooding.

This comes after heavy rain in the mining city at the start of the week caused considerable damage to a number of households. Many people had to be relocated in shelters or places of safety.

Several roads at the city have also been flooded or blocked after the rain.

According to Tshepo Davids, regional spokesperson of the South African National Civic Organisation (SANCO) in Welkom, the situation had worsened since the rain started at the weekend.

Davids says, fortunately, no casualties were reported thus far but the situation is getting out of control.

He added that the premier has committed to bringing the disaster management unit to look at the situation and offer help.

He says they distributed essentials like blankets and food to the displaced.

Davids says they hope the disaster management unit will be on high alert as heavy rain continues at the city and many people continue to seek help.

He concluded by saying scores of people are flocking to the places of safety, seeking help.

MMC and wife in court for illegal firearms