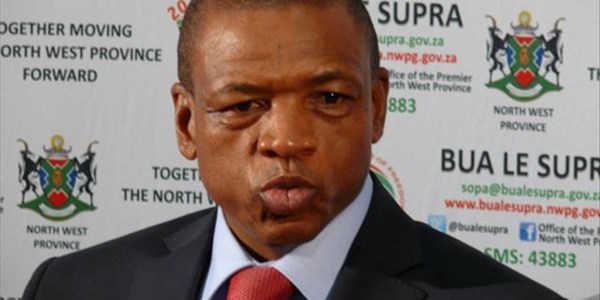 Former North West Premier and ANC provincial chairperson, Supra Mahumapelo, is calling on his party in the province to address their close to 6% drop in votes following their election triumph.

Mahumapelo describes the ANC as a “self-critical” organisation which will assess where they did not do well and move forward as a result. The controversial figure, however, distances himself from service delivery concerns and incomplete projects which sparked outrage in parts of the province in 2018 and during the special voting period earlier in the week. “How do you finish projects when you are not there? I was in government for three-and-a-half years and in government, for a project to be completed it doesn’t have to be me because it was started during Mahumapelo’s administration.” He adds the next Premier must ensure that those projects are completed because they were not done in his personal capacity but under government.

The former Chairperson of the disbanded Provincial Executive Committee - the decision which he has challenged and won in court - denies rumours doing the rounds that the unrest that occurred in the province earlier this week was carried out by some of his most ardent supporters. Mahumapelo tells OFM News he does not have supporters, the ANC does. On Monday protests flared up in areas where he allegedly has a stronghold.

The first was in Ganyesa, which falls under the Dr Ruth Segomotsi Mompati District Municipality. Angry residents torched an Electoral Commission presiding officer’s car, damaged a second vehicle and disrupted special voting in the area on Monday, 6 May. Altogether 21 people were arrested for the incident and faced charges related to the contravention of the Electoral Act, malicious damage to property and robbery. Members of the South African Defence Force were deployed to the area to ensure that the general elections take place without disruption. Others include protests in the Dr Kenneth Kaunda district - specifically Jouberton in Klerksdorp - and in the Ngaka Modiri Molema district, specifically Dithakong outside Mahikeng.

Riemvasmaak residents fed up with lack of services