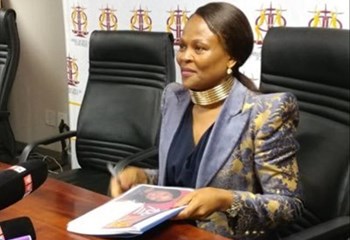 Public Protector, Busisiwe Mkhwebane, maintains her office is not concerned with winning or losing court battles.

She says her main focus remains ensuring that those at grassroots levels are provided with services, government officials are held accountable, and that her office fights against corruption in all spheres of government. Speaking to OFM News, post her visit to the Free State where she engaged with residents, the Provincial Legislature, as well as the Members of the Executive Council, Mkhwebane said the focus of the country should not be on those who drag her office to courts, but on nation-building. She expressed concern with the lack of service delivery in Hobhouse where she engaged residents and said more needs to be done to deal with issues raised by communities. She highlighted that they have the trust of the people on the ground and that her office’s credibility is not under question despite several court battles.

She further welcomed the Gauteng High Court's dismissal of former Western Cape premier Helen Zille's application to have her report on Zille's controversial colonialism tweets reviewed and set aside, stating that it is not about her credibility but the dignity of South Africans.

It's not over, says Mkhwebane