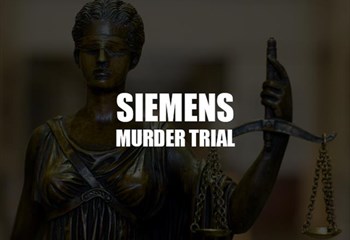 The list of witnesses testifying in the murder trial of Bloemfontein businessman Louis Siemens has been leaked on social media.

Prosecutor Johan de Nysschen made this known during trial proceedings on Wednesday in the Bloemfontein High Court as the witness testifying this morning, Grootvlei Head and Mangaung Private prison adviser, Tatolo Setlai, told the court that he had been intimidated following his testimony on Tuesday.

De Nysschen is of the view that the witness list has been leaked partly to intimidate the state’s witnesses. It is not yet revealed when the full list was leaked, but the relevant authorities are investigating the matter.

Setlai, who describes himself as accused number one Stanley Bakili’s guardian, is still testifying at great length about the various meetings that took place at the Windmill Casino between some of the accused during the days preceding Siemens’ murder.

He was speaking as an acquaintance of the accused and a regular visitor of the casino where he personally witnessed these group discussions. So far the 65-year-old prison head has placed Bakili, Bayswater detective, Molebatsi Mogoera, Mojalefa ‘Jali’ Molusi, and military man Clive Tshivenga together at the casino. One of these “gatherings” took place on the eve of the murder, 9 May 2019,  as evidenced by CCTV footage taken at the Casino.

De Nysschen is at present taking Setlai through the footage from different angles, and making him account for some of the events.

Siemens was shot and killed on 10 May 2018 in the basement parking area of Preller Square Shopping Complex. It is alleged the deceased was paying bribes to government officials through the accused Bakili to have CityMed’s hospital bed licence amended to allow for more beds, when the business partnership soured. Bakili, Mogoera and Tshivenga join Kagiso Chabane, Mojalefa Jali Molusi, Moeketsi Lesia, Karabo Tau and Sizwe Mpati in the dock. They are between the ages of 29 and 56, and include three police officers, a disbarred advocate, an accused in separate double murder cases, and a military man.

Hawks asked to hold off on probe amid fresh CR17 leaks