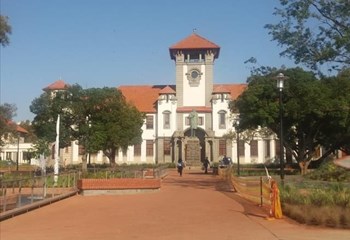 Photo: Katleho Morapela
The University of the Free State’s student leadership remains resolute that registration will not resume on Monday as planned, until the institution meets their varied demands.

In it, the SRC blasts the institution stating “the UFS is not ready to take student matters to heart”. The reported bone of contention between the parties include students with outstanding fees not being allowed to register, as well as news that NSFAS will not be funding unaccredited off-campus student housing. OFM News spoke to owners of unaccredited off-campus student housing at length who explain from their perspective, that while each institution is guided by the higher education act on student housing, each institution, in essence, sets up its own requirements for accreditation. This is yet to be confirmed by the institution.

All these issues will be again discussed in a meeting between UFS management and the SRC on Monday morning.

On Friday, OFM chatted to students who came as far as Oudsthoorn in the Western Cape and as near as Sterkspruit in the Eastern Cape who were forced to make alternative arrangements and fork out extra money to be back when the process resumes, whenever that may be. Masentle Mosala’s daughter from Sterkspruit is one of those students. Mosala says “financially this is breaking us. We now have to pay R340 for a return trip”, she says there is no guarantee the situation will have normalise any time soon.

On Thursday, an unexplained fire erupted at the President Steyn residence at the above-mentioned campus. While police indicate the cause of the fire is unknown, security personnel on the ground, who have asked to remain anonymous, allege it was disgruntled students who started the fire. This has not been confirmed by police or the institution.

Disrupted first-year registration at UFS to resume on Monday