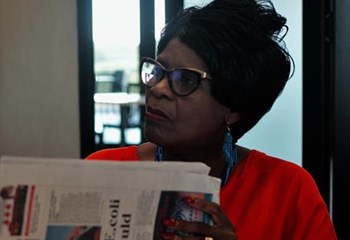 Olly Mlamleli
The embattled Mayor of Mangaung Metropolitan Municipality, Olly Mlamleli, is aware of the Hawks’ raid at the Metro’s offices last week, but notes that she is yet to receive an official report on the matter.

Mlamleli touched on the search and seizure operation very briefly, stating that she is not clear on the details of the investigation as she is awaiting an official report on the matter.

It has been confirmed the Directorate for Priority Crime Investigation seized documents at the Metro’s human resource and salary division. While some reports on the ground allege the investigation - and subsequent raid - pertain to unauthorised overtime payments, the OFM News team is yet to confirm that this is indeed the case.

Mangaung spokesperson, Qondile Khedama, tells OFM News the five-person intervention team appointed by the Free State Executive Council - led by Premier Sisi Ntombela - to bring the metro back from the financial brink, is aware of the raid and is currently following the matter up with the Hawks to establish the facts of the case.

The cash-strapped Metro - which includes Bloemfontein, Botshabelo, Dewetsdorp and Wepener - was placed under provincial care in December 2019, following Deputy Finance Minister David Masondo’s call for Ntombela’s intervention. It is the first metro in the country to be placed under administration. The call for intervention came whilst Mangaung was reeling from two downgrades by credit ratings agency Moody’s, which was deemed to be a reflection of the municipality’s weak and declining liquidity position. It also means there is a high risk the municipality will not be able to fulfill its obligations.

This was evidenced by the Metro being dragged to court by Bloem Water over its mounting water bill, as well as a subsequent failure to pay salaries on time in January 2020.

The five-man intervention team tasked with reviving the metro includes the current acting head of Public Works and Infrastructure, Ernest Mohlalo, who previously occupied the position of Chief Financial Officer. He joins Mzwakhe Mofokeng from the office of the Premier, who will be leading the team, as well as chartered accountant Masechaba Sesing and an official from Provincial Cooperative Governance and Traditional Affairs (Cogta) department, Dineo Mokheseng.