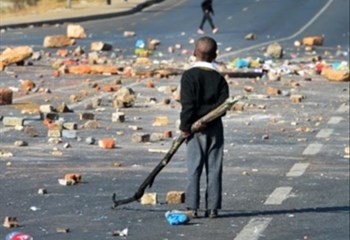 FILE PHOTO: Gallo
Pandemonium broke out on Thursday in Lichtenburg in the Ditsobotla Local Municipality in the North West.

Irate residents took to the streets and torched three trucks during violent protests in that area.

Police spokesperson Sabata Mokgwabone, confirmed to OFM News that the trucks were allegedly torched on the Ottosdal Road, Biesiesvlei Road, and Eerste Street by an unconfirmed number of members of the community.

OFM News understands that the protest is linked to unhappiness among some community members, who accuse the municipal mayor and manager of fraud and corruption, amongst others.

The municipality has since promised to respond to OFM News’ inquiries about the allegations of corruption levelled against municipal leadership.

It's alleged that the mayor is linked to a fraudulent tender worth R7.6 million.

The police have meanwhile condemned yesterday’s violence, and have described it as pure criminality which cannot be tolerated.

"We, therefore, urge law-abiding citizens to work together with us to expose those who commit crime, and at the same time request those who are dissatisfied about services to raise their concerns peacefully and within the ambit of the law. We can confirm that members of Public Order Police (POP) are currently monitoring the situation in Lichtenburg," Mokgwabone says.