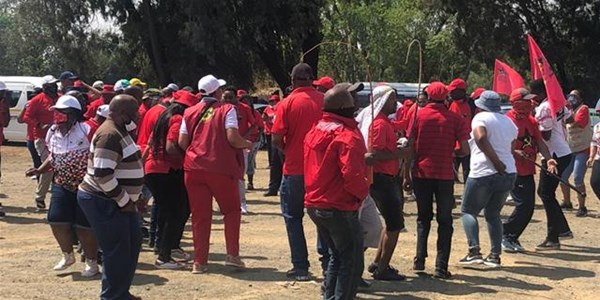 Hundreds of Cosatu, Saftu, and community members in Bloemfontein have taken to the streets to voice their concerns with the escalating number of corruption cases and job losses in the country.

They have painted the streets of Mangaung red as they march to the OR Tambo House, where premier Sisi Ntombela’s office is situated. Whilst this is part of the federations' nationwide strike, deputy secretary of Sadtu, Nkosana Dolopi, tells the OFM News team on the ground that issues arising from corruption, lack of collective bargaining - both in the public and the private sector - is increasingly leaving many without jobs and basic services. His statement comes just days after OFM News reported on one of the most controversial corruption cases in the province with R255 million earmarked to remove asbestos roofs in 2014, still unaccounted for.

The recent arrests by the Hawks relating to this corruption case have painted a picture of how the provincial Human Settlements Department failed to follow proper procurement processes and how the provincial government is seemingly enriching those politically connected with taxpayers’ money.