#Magashule’s entourage touches down in Bfn 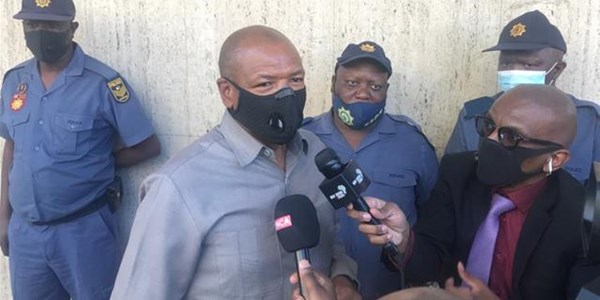 The close allies of ANC Secretary-General, Ace Magashule, have kept true to their word and travelled to Bloemfontein to rally behind their fellow comrade.

Former North West Premier, Supra Mahumapelo, and former State Security Minister, Bongani Bongo, have touched down at the building where the former Free State Premier is expected to hand himself over to the Hawks ahead of his first appearance at the Local Magistrate's Court later on Friday morning. Mahumapelo addressed media outside of the Absa Building revealing his and Bongo’s intentions.

Mahumapelo, who is now a Member of Parliament, says they believe in Magashule’s innocence and call on the ANC leadership to respect the legal processes. The situation in Charlotte Maxeke Street is frenzied at the moment, with members of the public gathering in the street out of sheer curiosity. There is a heavy police presence in the area, with officials monitoring the situation closely.

Magashule is appearing in connection with the 2013/14 controversial asbestos housing audit deal worth R255 million.

On Wednesday, Magashule’s co-accused appeared briefly before the Bloemfontein Magistrate’s Court. The case has been postponed to 19 February 2021. The state said this is to enable authorities to continue further investigations into the R255 million project and to arrest three more suspects embroiled in the matter. Magashule is the first of these three arrests.

They were granted bail in early October 2020 of between R50 000 and R500 000. At the time of the bail applications, prosecutor Johan de Nysschen said these are extremely serious charges that could land any one of the accused in jail for up to 15 years, and warned that the R100 000 was the price they had to pay for their involvement. De Nysschen also revealed the investigation into the matter is between 80 and 85% complete and he was ready to hand over the provisional indictment.

Sodi was awarded a R255 million rand worth tender in a joint venture with Diamond Hill Trading, owned by slain Welkom businessman, Igo Mpambani, by the Free State Human Settlements Department in 2014. Sodi previously admitted to the State Capture Commission of Inquiry, failure to declare that his company had no accreditation to carry out the entire project.

He further revealed he invested in residential property in Bloemfontein with Mokhesi. The former provincial Human Settlements HOD, during his own testimony before the commission, could not respond to questions as to why Sodi invested R650 000 in the house he lived in just months after his department awarded the joint venture the R255 million contract.

Zulu, on the other end, is said to have benefited from a R600 000 payment towards the purchase of a Range Rover made by Sodi in KwaZulu-Natal, in December 2016. Mlamleli was the then Free State MEC for Human Settlements.

Light at end of tunnel for water problems in FS

More corruption charges could be on the cards for Magashule – report