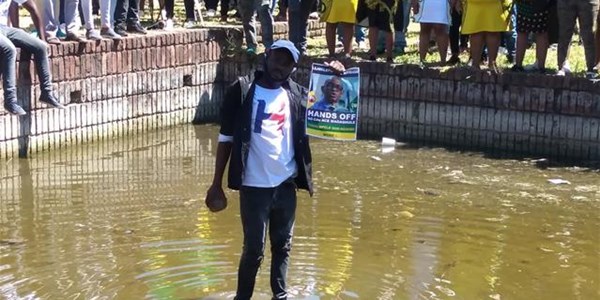 The Free State police are probing organisers of Friday’s gathering by ANC members in Bloemfontein.

Police spokesperson, Motantsi Makhele, says following careful consideration and analysis a decision was taken, as guided by the law, to open a case under the Disaster Management Act, according to a statement.

Hundreds of ANC supporters from across provinces such as the Northern Cape, North West and Gauteng travelled to the city to show support to the ANC Secretary-General (SG) Ace Magashule, as he appeared in court.

Makhele says the police had earlier warned and made people aware that under the Disaster Management Act, the gathering was illegal by way of failure to wear masks in public as well as not keeping social distance.

The Provincial Commissioner, Baile Motswenyane, is said to have instructed the District Commissioner for Mangaung Metro, which includes Bloemfontein, to put a team together to gather all information and make sure that the case is tabled before the court as soon as possible.

Although hundreds of Magashule supporters filled the streets of the city, police had, however, maintained high visibility keeping a watchful eye.

Hundreds of ANC supporters today gathered at Hertzog Square in Charles Street, Bloemfontein. Two busy streets leading to the Bloemfontein Magistrate's Court in the Mangaung Metro Municipality in the Free State were closed on Friday ahead of Magashule's court appearance.

The municipality's spokesperson, Qondile Khedama, tells OFM News that President Brand Street, which is between President Boshoff and St Andrews, was also closed for traffic.

St George Street, between Markgraaff and West Burger Streets, was also closed for traffic as thousands of Magashule and Mlamleli supporters picketed outside the court.