Calls for husband of presenter to be harshly punished 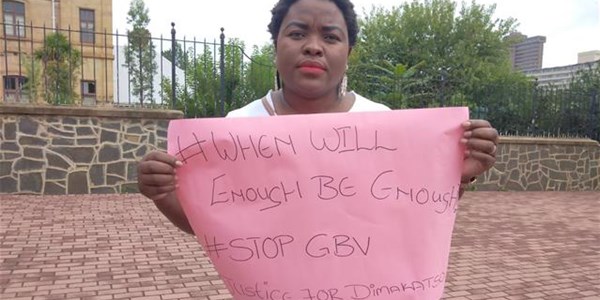 The Progressive Professionals Forum (PPF) says justice must be served in the matter between the state and the 39-year-old husband of Lesedi FM news and current affairs presenter.

The forum's Mannehileng Letuka in the Free State says Mackenzie Ratselane, who stands accused of stabbing his wife and popular presenter Dimakatso Raletsane multiple times, should be harshly punished to serve as an example to many others. She, however, says unfortunately the law must be given time to process the case against the suspect, who today abandoned his bail application plea at the Bloemfontein Magistrate’s Court in the Free State.

Letuka vows that the forum will be up in arms across the country to fight against the scourge of gender-based violence (GVB) and femicide.

“We are happy that with the progress from the government in relation to the case of Dimakatso Raletsane and we hope that, at the end of the day, we will hear good news about the suspect being imprisoned,” Letuka adds.

Mackenzie appeared before Magistrate Marinda Marx and made a surprise revelation that he will not be going through with his bail application. He stands accused of attempted murder, kidnapping, possession of a firearm and ammunition, and he could further be slapped with an additional charge.

The matter was subsequently postponed to 23 March 2021 for further police investigation. State prosecutor, Sello Matlhoko, informed the Magistrate that the state is yet to solicit three statements and will further await the ballistic report. Mackenzie remains in custody for now.

Mackenzie was arrested in Ennerdale in Gauteng last week. His arrest came after Dimakatso was found lying in a pool of blood with multiple stab wounds in Bloemfontein.

Mackenzie and Dimakatso are said to have quarrelled on their way to fetch their children in phase 2. She was later found by friends and residents in the Dinaweng area near a popular tavern and was subsequently sent to Pelonomi Netcare Hospital where she is said to be recuperating well.