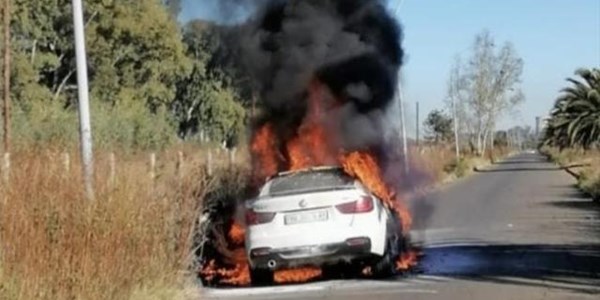 A case of hijacking has been registered for further investigation after the 41-year-old manager of Mangaung Metro Solid Waste was allegedly hijacked during the shutdown protest.

Sazly Hartzenberg from Bloemfontein Courant reports this comes after a photo of a burning vehicle was making the rounds this morning. According to Brigadier Motantsi Makhele, this was the vehicle of the 41-year-old manager of Mangaung Metro Solid Waste.

Makhele said the manager was driving along MacKenzie Street in Heidedal on his way to work when he was stopped by a white bakkie with registration number JKL 673 NW.

Three males from the bakkie then approached the manager in his vehicle and one pointed him with a firearm and instructed him to get out of the vehicle. “They then drove away with his BMW and after a few minutes the vehicle was recovered burnt at MacKenzie Street.”

According to police, the situation in the city is still tense and is being closely monitored by the police.