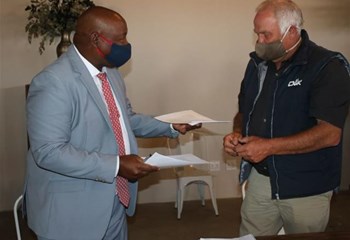 All eyes are set on the much-anticipated proceedings in Senekal in the Free State on Friday when the accused in the Brendin Horner murder trail are expected to appear in the Local Magistrate's Court.

Meanwhile, the Free State Department of Agriculture and Rural Development and Free State Agriculture (FSA) earlier this week signed a Memorandum of Understanding (MOU). Agriculture MEC, William Bulwane, says they also met last year to look at game-changers in the local industry. He says there were four issues that were agreed upon, which include issues around rural safety, farm support, border crime, and mentorship programmes for smaller emerging farmers. He says the stockholders then agreed that it is important to come up with a document  in which these common issues are identified after which it needs to be addressed. OFM News' Christal-Lize Muller spoke to him...

He says the situation that unfolded in Senekal last week was also discussed at the meeting held with FSA.  He says the memorandum is in place to try and close the gap on issues that were agreed upon previously especially in ensuring that farmers are also safe wherever they are.  He says farm killings are not racially motivated.  It's purely thugarism. He says in the Free State it is good to know that every time when a farmer has been attacked, perpetrators are brought to book. He refers to the murder of Brendin Horner after which two suspects were arrested two days after the incident. Bulwane says, however, the province need to up its game in fighting these attacks.

He says the department is not condoning any farm killing and will never do that. They gave their assurance to organised agriculture that the department is not condoning what happened to the young Horner. The department understands the anger among farmers who are crying all the time that they are killed. "We understand the plight, but we are appealing to everybody to not take the law into our own hands." It will cause anarchy and will result in South Africa being a banana republic. He says the planned gathering which will be attended by various members of organisations, political parties and activist groups, need to be handled with care, because once it is politicised too much. it can cause huge problems for the province.

The importance of brand perception