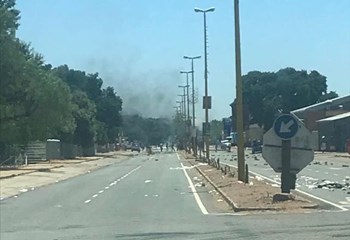 Photo: Supplied
Protest actions have flared up in the town of Olifantshoek in the Northern Cape.

It is alleged community members in this town are up in arms over a lack of service delivery and water supply issues. It is alleged that they thus far had to do without water for almost a month. Police spokesperson, Sergio Kock, says approximately 500 community members have taken to the streets and barricaded the N14 and the route leading to Upington with burning tyres and rocks. Kock says the police are monitoring the situation closely and warns motorist to be cautious. He confirms no injuries have been reported and no arrests have been made at this stage.

It is alleged the residents in this town and others within the Gamagara Local Municipality have to without water due to millions owed by the municipality.

This municipality, which includes the towns of Kathu, Shesheng, and Deben, is among the Northern Cape municipalities that owe Eskom and the water boards millions. It is more than R16 million indebted to Sedibeng Water Board.

Meanwhile, municipal spokesperson, Kamogelo Semaimai, is yet to respond to OFM News’ set of questions.