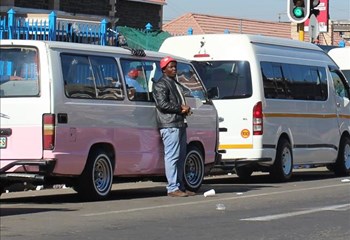 File Photo
A group of taxi operators who earlier barricaded roads in Oukasie and Brits following the arrests and appearance of fellow taxi operators is slowly starting to clear the road after all three suspects were granted bail by the Brits Magistrate’s court.

This is according to North West police spokesperson, Adele Myburgh. Three were arrested by police earlier on charges of assault after they allegedly assaulted an alleged drug dealer and damaged his vehicle three weeks ago in that area. She says following the police investigation into the matter, ten operators were arrested while another three were warned to attend the court on Wednesday. This apparently led to the operators barricading roads since early Wednesday morning. Myburgh says three are out on bail on Thursday and the police are still monitoring the situation in the area.

The taxi operators in Brits allegedly declared war against drug dealers and warned to target the alleged drug dealers and their businesses in the area. In 2018, three buildings were torched in central Rustenburg by taxi operators who vowed to do away with drug dealers. A tavern and other two buildings were set alight, along with several other building believed to be occupied by foreign nationals. In 2017, residents in East End set alight several houses they suspected were drug dens and brothels after a teenage girl went missing and was suspected to have been kidnapped by foreign nationals, allegedly running brothels in the rented houses.