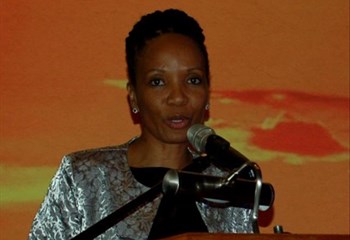 Madam Justice Mahube Molemela PHOTO: OFM News
The Chancellor of the Central University of Technology (CUT) in the Free State reached another milestone this past Easter weekend, taking part in her first Two Oceans Marathon.

Like thousands of other first time runners, Madam Justice Mahube Molemela entered the half-marathon in the Western Cape and succeeded in completing it with the support of her husband and son, Sello, and Moeletsi Molemela.

CUT spokesperson, Dan Maritz, congratulated the Chancellor on the latest of her many accomplishments adding “the university is indeed proud to be associated with Madam Molemela and is privileged to have her as the Chancellor".

She has a good record of personal support to worthy causes in our communities and continues to render such support through the position she holds in society,” concludes Maritz.

In 2018, Judge Molemela was appointed by Pres. Cyril Ramaphosa as a judge of the Supreme Court of Appeal (SCA) located in Bloemfontein.