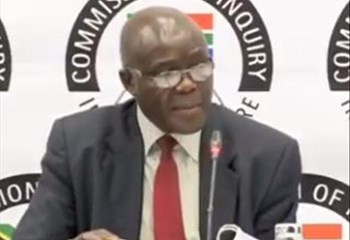 Testifying before the State Capture Commission of Inquiry led by Deputy Chief Justice Raymond Zondo, Thabethe outlined how the province was concerned over the number of small milk dairies that were closing down.

He initially told the commission that the Free State does not have processing milk facilities and farmers had to spend thousands to have milk transported to Gauteng to be processed and transported back to the province before it could be consumed. He later contradicted himself.

Amongst his reasons for establishing the failed Gupta-linked Estina project, was that it would create jobs, get black farmers on board with regards to dairy farming, and help small farmers who had not entered into the industry on a larger scale.

Thabethe’s first day of the hearing further placed procurement procedures in the Free State under the spotlight. This, as he had to explain the department’s rationale for entering into a contract with an Indian-based milk processing company - Paras – as their service provider, whereas there were other milk producers in India that rank higher.

#StateCaptureInquiry Thabethe says the existing milk processing plants in the Free State [which he earlier said didn't exist] would not be able to help them achieve what they wanted to. Hence they had to build a new plant in Vrede.

Thabethe confirms no feasibility study was conducted for #Estina