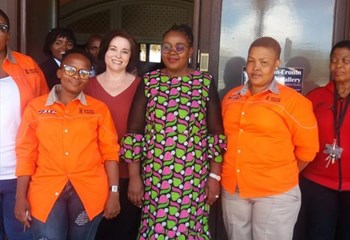 More needs to be done to promote domestic tourism and boost the economy of the Northern Cape and the entire South Africa.

This is according to Tourism Minister, Mmamoloko Kubayi-Ngubane. Addressing tourism stakeholders and members of the media in the Northern Cape ahead of the ANC 108 rally set to take place in Kimberley on Saturday, 11 January 2020, Kubayi-Ngubane highlighted that the tourism industry has great potential to grow the economy of the country and address issues of unemployment.

Kubayi-Ngubane said it is crucial to market the country as a destination of choice in order to grow the industry and the country's economy. Speaking ahead of the much-anticipated rally where President Cyril Ramaphosa is expected to address approximately 25 000 delegates, Kubayi-Ngubane has called on all Northern Cape members of society to explore their province and the entire country.

"Domestic marketing is vital for the growth of our economy. We need our people to tour their own country in order to stimulate economic growth and draw international tourists" she said.

Kubayi-Ngubane further urged the province to take advantage of their natural resources and multibillion-rand projects such as the Square Kilometre Array (SKA) to expand the province's tourism industry.

She alluded that they are expecting more tourists to come into the province for the Bloodhound project.

Kubayi-Ngubane has highlighted that although a number of people often visits coastal areas, no province is more important than the other. She told delegates gathered at the local Salga office's that in the government's ability to market the country, it becomes important to prioritise all provinces as citizens have different interests.

Kubayi-Ngubane added that taking events such as the ANC's national celebrations to rural provinces such as the Northern Cape, serves as an example of how the government wants to encourage citizens to tour the entire country.