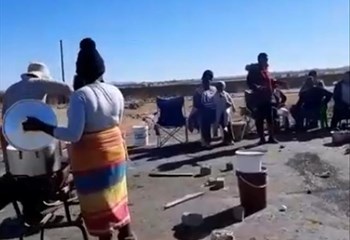 Image: Supplied
Some residents of Sebokeng near Vereeniging, have barricaded the Golden highway with fire and cooking pots, with some preparing their meals on the highway in a protest over electricity.

The disgruntled residents claim to have been without electricity since the beginning of the lockdown period - despite allegedly having attended many meetings and being promised electricity.

The highway has been barricaded since the early hours of the morning. Emfuleni local municipality's Mayoral spokesperson, Lebo Mofokeng, tells OFM News the area in question's electricity is supplied by Eskom and not the municipality.

Mofokeng adds police have been dispatched to restore calm and to monitor the situation.