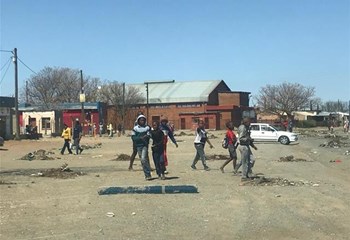 PHOTO: Olebogeng Motse
Irate residents of Bolokanang in Petrusburg are up in arms and calling for the immediate resignation of the Letsemeng Local Municipality's mayor over service delivery issues.

The community leader Kevin Lehlohonolo Banda tells OFM News that residents have, amongst others, been forced to endure raw sewage and waste refuse that has allegedly not been collected for over two months, amongst others.

For months residents have been trying to get answers from the municipal mayor Sello Bahumi but their efforts have not yielded any results.

Banda says what is exacerbating the matter around the area is the high rate of youth unemployment and lack of infrastructure development.

Meanwhile, OFM News previously reported on the wave of protests which rocked this municipality from 2018 to 2019 when irate residents of Koffientontein went on the rampage and called for the resignation of then-mayor Thandiwe Reachable.

Evidence or the effects of the rampage caused by the disgruntled residents' protests in the area are still visible. Burnt tyres, rocks and waste refuse used to block the road are still lying on the ground.

Despite the fact that residents are currently not engaged in protests, the mood is still tense with some residents still gathered at the corners of the streets.

OFM News has managed to also spot the local police doing rounds in the area, monitoring the situation.

On Wednesday night the Free State police warned motorists travelling between Bloemfontein and Kimberley to use the Dealesville and Boshof Roads and rather avoid the N8 road. Two residents have allegedly been arrested and it's not known for now if anyone was injured during the protests.

Communication will be key - Letsemeng mayor