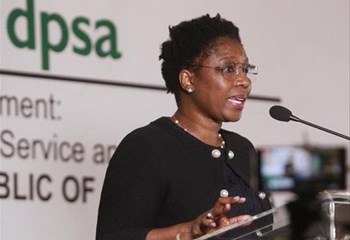 Dlodlo, who was flanked by Police Minister Bheki Cele in their joint briefing on Friday, revealed that she received a situational report from intelligence officials on the ground.

She was informed that the exchange of words between protestors captured on screens, is what you get when you have a large gathering of people with opposing views like in this case, with the EFF and the farming community in Senekal.

“I think from what we have seen over the last few days, much as in the media space there has been an indication there are tensions between the various sides – the EFF or the farming community – by an large all of them took a decision that they did not want to see violence erupt”.

In line with Dlodlo’s sentiments on the matter, only one person was arrested for possession of an unlicensed firearm between Thursday and Friday, which is in stark contrast to reports on social media alleging a boot full of weapons were found outside the town.

Police Minister Bheki Cele told media, law enforcement authorities conducted roadblocks outside the Free State town beginning Thursday at 16:00 pm. He says vehicles were searched and turned away when firearms were found inside the vehicles.

Cele did not divulge additional information as to whether the person arrested, was a member of the EFF or the farming community when probed by members of the media. Cele says the picture of a car boot full of weapons doing the rounds on social media is false, has not been verified by any law enforcement officials.

Even after EFF leader, Julius Malema, took to the crowd to accuse the farming community of intimidation, this ultimately did not incite any violence in Senekal.