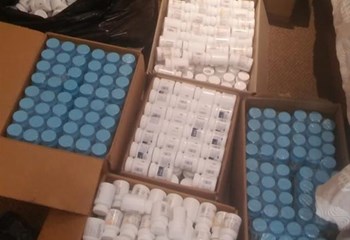 Photo: Supplied
The number of people arrested in connection with the smuggling of stolen Antiretrovirals (ARVs) in the Free State in 2020 alone, has risen to 16.

This as seven suspects traveling to Kroonstad from the Gauteng province, were arrested by authorities on Saturday in possession of stolen ARV tablets with an estimated value of over R1,9 million. Free State police spokesperson, Motantsi Makhele, says the group, which includes five men and two women between the ages 31 and 39 years old respectively, will appear before the Kroonstad Magistrate’s Court soon for contravening the Medicine Act. He says the group was planning on selling the drugs to a potential buyer in Welkom.

“An intelligence driven operation was conducted in conjunction with Illicit Mining task team which led to the arrest of seven  suspects in Kroonstad”. Not only were the 1272 containers of ARV tablets with an estimated value of R1 908 000 confiscated, but the Chevrolet Cruz they were traveling in was also taken in by police. “Four suspects are from Sebokeng in Vereeniging, one is a Lesotho citizen staying in Welkom, one is from Phuthaditjhaba and the other one from Theunissen,” explains the police spokesperson.

It is unknown if this group forms part of the syndicate that was nabbed in the Free State in early 2020 for the same crime.

#BrendinHorner: All eyes on #Senekal court

DA calls for state of disaster in fire-swept FS areas