The South African Police Service (SAPS) in the Free State recently made its operational plan ahead of the festive season known.

OFM News spoke to Deputy District Commissioner of Mangaung Metro, KJ Ramakotjo, who says they have plans of heightening security on farms. He encourages farm owners to be cognisant of what is happening around them, and that they regularly count their stock as this helps navigate stock theft in the area. Ramakotjo says they will continue to actively make use of their rural safety coordinators in the Mangaung Metro where there is farming communities or rural areas.

Angling in South Africa is a booming, multi-billion rand industry. According to Denene Erasmus, editor of Farmer's Weekly, angling in South Africa could potentially be very valuable to farmers who have the opportunity to add on-farm angling experiences in either dams or rivers that are located on their farms. Erasmus further adds that there are about 1,3 million anglers in South Africa. More than half of these anglers practise freshwater fishing.

The Senwes Group has announced good interim results for the year. It says in a statement that its financial results reflect a 47,8% increase in turnover amounting to R5,2 billion, while earnings before interest, depreciation and amortisation increased from R511 million to R533 million. Francois Strydom, the Group CEO, attributes the record results for the first six months of the financial year to an exceptional agricultural production and commodity price cycle, together with the unlocking of synergies from merger transactions, and the reorganisation of the business model of the Senwes group. This resulted in headline earnings surpassing its previous record of R224 million by 35,3% to R303 million. 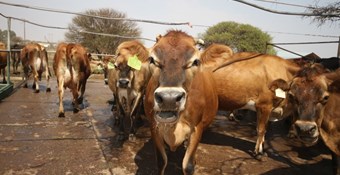