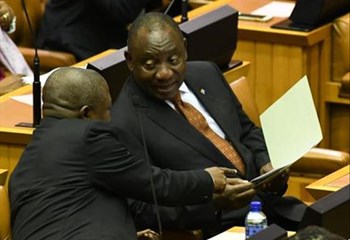 Democratic Alliance leader Mmusi Maimane said Ramaphosa's dream of high-tech cities and high-speed trains rang hollow as most of the majority of South Africans would be left behind.

"Our priority should be to fix what is broken and build a South Africa where all can be guaranteed an equal opportunity - be it in the classroom, on the sports field, or in the workplace," said Maimane.

"To meet these urgent challenges we don’t need dreams. We need money, we need the right people and, most importantly, we need a plan. And in order to do that, we don’t need to build new smart cities, honourable president. We need to make our current cities smart."

Participating in the debate on the president's state-of-the-nation address (SONA), Economic Freedom Fighters (EFF) leader Julius Malema said the realities faced by South Africans on a daily basis required Ramaphosa to move past imaging, and rather provide a clear plan of action, a timetable and proper implementation.

"After being stuck for four hours on a strain in Soshanguve, the billionaire president was so traumatised that he now fantasises about a bullet train from Musina to Cape Town."

Before the much-complicated bullet train Mr President, you need to get the Soshanguve train to work and take people to work on time," Malema said, referring to the president experiencing a four-hour delay on a train ride in South Africa's capital city during the election campaign - a daily occurrence for many of the country's commuters.

Malema described Ramaphosa's speech as "limited" to fighting corruption, fighting crime, "asking black people to pay for electricity and getting 10 year-olds to read to understand".

The fiery EFF leaders said the president should stop "imagining" and start doing.

"People are poverty-stricken now, people are unemployed now, people are landless now, people are being raped now, crime is too high now, they are not dreaming about it. That is the reality of their life. Stop dreaming, implement programmes that are going to change their lives, wake up," said Malema.

Ramaphosa's dream of a smart city did, however, resonate with the Minister in the Presidency Jackson Mthembu, who insisted the president was both a dreamer and a doer.

"Those who claim that the SONA is all about dreams do not understand that all major revolutions worldwide began with an idea. A people without dreams, without vision and purpose, is a people with no future," Ramaphosa said to loud applause from ruling party benches.

"The new smart city that the president talked about is our collective dream. It will be followed by decisive action, wherein we invite young, innovative minds who are [information and communications technology] ICT savvy to share their ideas on the design and architecture of such a future smart city."

The long-awaited report by public protector Busisiwe Mkhwebane into a R500 000 donation made to Ramaphosa's CR17 campaign to become governing party leader also loomed large during the debate.

Both Maimane and Malema called on Ramaphosa to lead by example when he spoke of eradicating corruption, insisting he needed to clear the air regarding the donation by Bosasa's Gavin Watson - a man alleged to have been behind the bribing of state officials and politicians in exchange for lucrative government contracts.

Earlier this month, the Public Protector wrote to the president, informing him that he had been implicated in her investigation, giving him time to respond to her report.

"Mr President, you should lead by example and stop delaying and frustrating the Public Protector’s investigation in your Bosasa dealings," Maimane said.

"Let the Public Protector do her work, and once the report is finalised, appear before a Parliamentary Ad Hoc Committee so that the matter can be dealt with in an open and transparent manner."

Malema issued Ramaphosa with a stern warning that if he did not "come clean" on all those who donated to his campaign, the EFF would have no alternative but to institute impeachment proceedings.

"Mr President, we will not win a fight against corruption if the president is involved in allegations of money laundering," the fiery EFF leader said.

"We want the president to come clean, to explain and take the country into his confidence as to who are the people who donated money to the CR17 campaign and what do they stand to benefit."