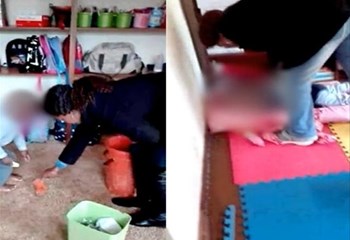 PHOTO: SABC News
Sentencing proceedings are expected to continue on Wednesday in the case against a caregiver shown in videos beating children at a creche in Carletonville west of Johannesburg.

Nelly Senwametsi, who worked at Ninnie’s Neuron nursery school, is expected to learn her fate when the case resumes in the Oberholzer Regional Court in Carletonville.

The matter was postponed last week after the court was informed that Senwametsi’s lawyer was unable to attend proceedings as he was in self-isolation.

Senwametsi was found guilty of two counts of assault and one count of assault with intent to cause grievous bodily harm in July 2020. This after several videos went viral in April 2019 showing a childminder beating and slapping children, provoking public outrage and anger on social media – which led to the closure of the daycare by the government.

Families of the children shown in a video being beaten by Senwametsi were disappointed that court proceedings had to be again been postponed.